The grave of Elmer Webster. We will remember him forever. Personal death notice and the information about the deceased. [86207387-en]
to show all important data, death records and obituaries absolutely for free!
7 August
Monday
77 years
28320 days
19 February
Saturday
Images 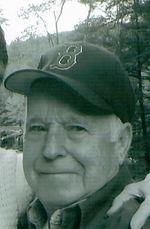 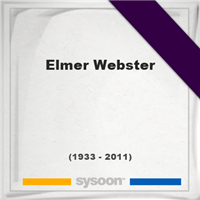 Biography and Life of Elmer Webster

Bub was born August 7, 1933 in Wendell, Massachusetts, the son of George A. and Delphine (Fox) Webster. He grew up in Wendell, attending Wendell schools and New Salem Academy and has lived in the Athol-Orange area since 1955.

Bub worked for the B.R. Group (formally Sogards) in Orange for many years until his retirement in 1995. He was a member of the Orange Assembly of God Church and also attended the Assembly of God Church in Winchester, NH. Bub’s faith was a very important part of his life. He was a very giving person, always helping others and would give you the shirt off his back. He enjoyed fishing, walking, especially in the Quabbin, taking rides in the country, his large vegetable garden, listening to gospel and country music, singing and yodeling and dancing. He was also a foster parent, helping many children throughout the years. Besides his love for Jesus he especially enjoyed spending time with his family.

He leaves his wife of 22 years, Susan (Laffond) Webster; four daughters, Sherry Monska of Orange, Shelley Rowe and her husband Lee of Orange, Sarah (Laffond) Meunier and her husband Lee of Gardner and Ashley Dresser and her husband Shawn of Orange; two step daughters, Maureen Webster of Athol and Donna Baronas of Royalston; two sisters, Katherine Grout and Joan Gates, both of Orange. To his eight grandchildren he was known as “Bucky.” He also leaves 10 great grandchildren and many nieces and nephews. Bub was predeceased by brothers George (Sonny) Webster, Jr. and Frank Webster; six sisters, Thelma Giround, Henrietta LaFountain, Beatrice Harris, Phyllis Munize, Carol Stansell and Shirley Kingsbury.

A memorial service for Elmer Webster. Information about event on Sysoon. [86207387-en]

Address and location of Elmer Webster which have been published. Click on the address to view a map.

QR Codes for the headstone of Elmer Webster

Sysoon is offering to add a QR code to the headstone of the deceased person. [86207387-en]

QR code for the grave of Elmer Webster