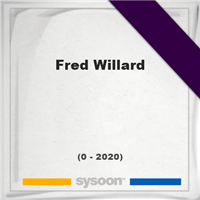 was an American actor, comedian and writer. He was best known for his roles in the Rob Reiner mockumentary film This Is Spinal Tap; the Christopher Guest mockumentaries Waiting for Guffman, Best in Show, A Mighty Wind, For Your Consideration and Mascots; and the Anchorman films. In a 2012 interview with the Television Academy Foundation, Willard said he was born on September 18, 1939; that he was "pretty sure" it was in Cleveland; that his birth name was Frederick Charles Willard (without specifying his first name's spelling), and that his father was also named Frederick, but spelled differently. U.S. Census records from April 1940 show the father as "Willard, Fred C", working in the financial department of a bank, and the son as "Frederick", but also shows the son as attending school in 1940 and at the age of "6" which, if correctly indicating years instead of months, would place his birth in 1933 or 1934. In addition, at his death in 2020, his daughter was quoted as saying that he was 86, which would place his birth in 1933 or 1934. Some indirect sources contradict one fact or another, such as listing Willard's birthplace as Shaker Heights, Ohio. In any case, the younger Willard stated that he grew up in Shaker Heights, which corresponds to the 1940 Census record showing the family on Riedham Road in that city. His mother Ruth, whose maiden name was Weinman, was a housewife. Willard said that he was 12 years old in 1951 when his father died. The younger Willard graduated from the Kentucky Military Institute in 1951 and the Virginia Military Institute in 1955. He was stationed in Germany while serving in the United States Army.

A memorial service for Fred Willard. Information about event on Sysoon. [86228084-en]

Fred Willard at Archives.com. What is Archives

Military records of Fred Willard at Fold3.com.  What is Fold3

Address and location of Fred Willard which have been published. Click on the address to view a map.

QR Codes for the headstone of Fred Willard

Sysoon is offering to add a QR code to the headstone of the deceased person. [86228084-en]

QR code for the grave of Fred Willard Note: Do you have a family photo of Fred Willard? Consider uploading your photo of Fred Willard so that your pictures are included in Fred Willard's genealogy, family trees & family history records. Sysoon enables anyone to create a free online tribute for a much loved relative or friend who has passed away.