The grave of Jerry D. Mahlman. We will remember him forever. Personal death notice and the information about the deceased. [86208440-en]
to show all important data, death records and obituaries absolutely for free!
21 February
Wednesday
72 years
26579 days
28 November
Wednesday
Images 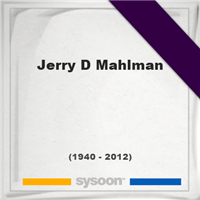 He was an American meteorologist and climatologist. Mahlman graduated at the Chadron State College where he earned his undergraduate degree and Ph.D. During his professional career he devoted issue of the stratosphere and troposphere and issue of global warming problem. He received several awards and honors for his work such as the Carl-Gustaf Rossby Research Medal of the American Meteorology Society, the Gold Medal of the United States Department of Commerce and the Presidential Rank Award of Distinguished Executive.

A memorial service for Jerry D. Mahlman. Information about event on Sysoon. [86208440-en]

Address and location of Jerry D. Mahlman which have been published. Click on the address to view a map.

QR Codes for the headstone of Jerry D. Mahlman

Sysoon is offering to add a QR code to the headstone of the deceased person. [86208440-en]

QR code for the grave of Jerry D. Mahlman