The grave of Karine Kazinian. We will remember him forever. Personal death notice and the information about the deceased. [86207977-en]
to show all important data, death records and obituaries absolutely for free!
8 January
Saturday
57 years
21152 days
6 December
Thursday
Images 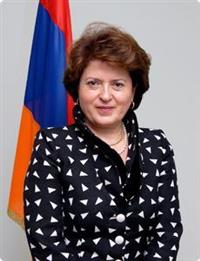 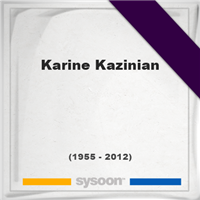 Place of birth:
Yerevan / Armenia (am)
Place of death:
United States (us)

Biography and Life of Karine Kazinian

She was an Armenian diplomat, the Extraordinary and Plenipotentiary Ambassador of the Republic of Armenia to the United Kingdom of Great Britain and Northern Ireland.

A memorial service for Karine Kazinian. Information about event on Sysoon. [86207977-en]

Address and location of Karine Kazinian which have been published. Click on the address to view a map.

QR Codes for the headstone of Karine Kazinian

Sysoon is offering to add a QR code to the headstone of the deceased person. [86207977-en]

QR code for the grave of Karine Kazinian