The grave of Leonard Richard Merullo. We will remember him forever. Personal death notice and the information about the deceased. [86216318-en]
to show all important data, death records and obituaries absolutely for free!
5 May
Saturday
98 years
35819 days
30 May
Saturday
Images 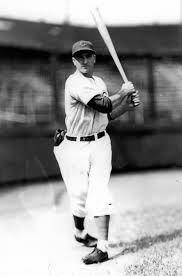 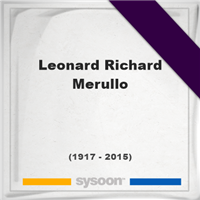 was an American professional baseball player who played shortstop in the Major Leagues from 1941–47. He was born in East Boston, Massachusetts. Merullo played shortstop for the Chicago Cubs for seven years in the major leagues in the 1940s. He appeared in three games during the 1945 World Series against two-time MVP Hal Newhouser, pitchers Virgil Trucks, Tommy Bridges, and slugger Hank Greenberg of the Detroit Tigers, who defeated the Cubs in seven games in the Series, the last one the Cubs have played in as of 2014. With the death of Andy Pafko on October 8, 2013, Merullo was the only living man to have played for the Cubs in a World Series, as well as being the oldest living former member of the Cubs. Merullo's major league career began in 1941, and in 1942-45 he won the shortstop job, with Stan Hack playing third base and Merullo's roommate, Phil Cavarretta, at first. In 1946, Billy Jurges, Bobby Sturgeon and Merullo shared the shortstop position until Merullo regained the position in 1947. During this period, Merullo was known to have the quickest throwing arm in baseball.[citation needed]. Merullo's time with the Cubs caused him, in later years, to be a frequent subject of Chicago columnist Mike Royko's annual Cub Quiz.

A memorial service for Leonard Richard Merullo. Information about event on Sysoon. [86216318-en]

Address and location of Leonard Richard Merullo which have been published. Click on the address to view a map.

QR Codes for the headstone of Leonard Richard Merullo

Sysoon is offering to add a QR code to the headstone of the deceased person. [86216318-en]

QR code for the grave of Leonard Richard Merullo